Justin Trudeau was born into wealth, and has spent his entire life fraternizing with the wealthy, powerful and influential.  This has distanced and insulated him from the concerns of the less advantaged – namely, most of us.

As a result, he knows little and understands less about the lives of ordinary people.  As long as he is with globalist billionaires, celebrities, diplomats and foreign politicians, he is in his element.  The 35 million Canadian citizens do not appear to have Trudeau’s interest, or even respect.  For example, Trudeau regards only feminist women to be worthy of his interest, the rest of us are discarded.

During an interview with the New York Times, in 2015, Trudeau stated:  “There is no core identity, no mainstream in Canada”.  In this bizarre statement, Trudeau is ignoring Canada’s proud history of European national origins, our pan-cultural heritage and strong traditions.  Instead, he is imposing on the country his own limited understanding of Canada and his own narrow vision.

In the March, 2017 budget, Trudeau established a homosexual secretariat in the Privy Council Office, headed by homosexual Liberal MP Randy Boissonnault (Edmonton Centre).  Mr. Boissonnault’s responsibilities include coordinating the machinery of government to advance homosexual rights.  Boissonnault claims that his new role has already led to the recent Liberal decision to provide a federal tax credit for homosexuals to use reproductive technology to create children.  Such children are only “objects” to satisfy homosexual couples.  This has been done despite a mountain of evidence which shows that children require opposite-sex parents to grow up to be well-balanced individuals.

Boissonnault’s job also includes working with LGBT organizations and the government to provide an apology to homosexuals for supposed past discrimination.  He also plans to work behind the scenes at the Commonwealth meetings where 36 of 52 member nations do not accept the west’s approach to homosexuality.

Overt Discrimination Against Pro-Life Groups

Trudeau has stopped summer job funding by Liberal MPs awarded to pro-life organizations.  Last year Liberal MP Iqra Khalid (Mississauga-Erin Mills) had approved more than $56,000 to the Canada Summer Job Program for the Calgary based Canadian Centre for Bioethical Reform.  Pro-life groups, such as Campaign Life Coalition, LifeSiteNews, and Priests for Life also received a total of $3.5 million in 2016.  The Abortion Rights Coalition of Canada brought this terrible information to Trudeau’s attention, who was scandalized by it, and has set about changing the rules for summer job programs, prohibiting any further funding to pro-life groups by Liberal MPs.  Planned Parenthood, Ottawa, and Planned Parenthood, Toronto, were among groups that received Canada Summer Jobs grants in the past and they, along with other pro-abortion groups, will be generously funded in the future.  Narrow minded, bigoted and discriminatory are adjectives that come to mind when describing Justin Trudeau’s perspective.

Because of Trudeau’s elitism, he appears to have little interest in actually governing Canada.  It’s tedious and boring work.  He doesn’t like to cloud his mind with issues.  As a result, since he has become Prime Minister, he has established some 80 “consultation” groups to come up with a plan of action on such diverse issues as, marijuana, senate appointments, appointments to the Supreme Court of Canada, economic policies, immigration, etc.  These are not “public” consultations by any means, but are consultations led by liberal fellow travellers whom Trudeau disarmingly calls “independent and non-partisan”.  These committees have, without exception, come up with politically correct solutions and appointments to accommodate Trudeau’s restricted vision of Canada. 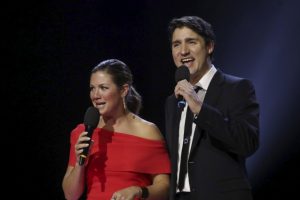 Trudeau prefers to be a celebrity flitting about Canada and internationally, spending his time with the “beautiful”, important people in the world.  It’s about image, but not substance.  He employs (at taxpayer’s expense) a photographer, Adam Scotti, who follows him around all day long taking flattering photographs of him which are then posted all over the media.   Trudeau and his wife were prominent on Vogue fashion magazine in 2016.  He was delighted to recently appear and make a speech at the Canadian Juno Awards with his wife Sophie Gregoire.

He spent his Christmas holidays at the luxurious home of the Imam Aga Khan on the latter’s Bahamian Island.  The Aga Khan Foundation, not incidentally, has received $300 million in funding from the federal government.  Trudeau lied when he said he was required to take the Aga Khan’s helicopter to the island (against government regulations), claiming that there was no other way to reach it.  This was incorrect.  This trip cost the Canadian taxpayers $127,000 to cover the cost of security for the Prime Minister, including travel expenses, overtime wages and per diem for RCMP members.  Further costs included $32,000 for the use of the government’s Challenger Jet and accommodation and per diem staff from Global Affairs Canada.

Accompanying Trudeau and his family were the President of the Liberal Party of Canada and her husband, Trudeau’s close friend, Tom Pitfield.  The latter lucked out in receiving money from the Trudeau government to sponsor a conference that featured Liberal cabinet ministers as speakers.  The Liberal party has also hired Tom Pitfield to train personnel for party purposes.  Trudeau denies that Pitfield was hired because of cronyism.  Rather, he claimed it was because of Pitfield’s competence.  Why would we think otherwise?

Trudeau still stubbornly refuses to stop his “cash for access” meetings with corporate, foreign and Canadian elites charging $1,500 a plate.  These meetings are attended by both Trudeau and many of his cabinet ministers.  Some of these invitees to the meetings were high level Chinese investors, one of whom has agreed to fund the construction of a statue in Montreal, of Trudeau’s father, at a cost of $50,000.  The Trudeau Foundation, also honouring Justin Trudeau’s father, received a $200,000 donation from this Chinese businessman and political advisor to the Chinese government.

Why is Trudeau continuing on his costly, narcissist track?  It is because he believes that he is one of the “anointed” ones – one of the elites – who consider it their duty and responsibility to guide the benighted (ignorant) i.e. everyone else, away from their own worst instincts.  He has a vision of himself as having a moral role in the world.  Problems exist because others are not as wise or as virtuous as “the anointed”.

Trudeau, believing he is above the ordinary, is a star in his own right.  He thinks the show is all about him, and he thinks the optics of those opposing him are irrelevant because they are motivated by unworthy purposes.  He is so immersed in the cult of himself as an international anointed celebrity that he does not realize he is not starring in a reality show, but is actually a Prime Minister elected to serve the public.

Unfortunately, Trudeau’s gallivanting about does not mean that he has any influence. He has none at all.  He is universally regarded as an intellectual light-weight with nothing to contribute, but his charm and good looks!  His narcissism and vanity do not help Canada one little bit.