The Liberal government proposes to solve the horrendous increase in drug overdose deaths by providing for the proliferation of drug injection sites. According to the testimony of Minister of Health, Jane Philpott, before the Senate Standing Committee on Legal and Constitutional Affairs, on March 29, 2017:

The evidence is abundant that when properly established and maintained supervised consumption sites save lives without increasing drug use and crime in the surrounding areas.

Unfortunately, this government has been gravely misled on these assumptions.

Over 30 peer reviewed studies have supposedly indicated that InSite, the drug injection site in Vancouver, has curtailed crime, disease, and led to a 35% reduction in deaths caused by drug overdose.

It is significant that these 30 studies of InSite were all carried out by the same individuals from the British Columbia Centre for Excellence on HIV/AIDS, located at UBC, who were the activists who had lobbied for the establishment of the drug injection site in the first place.  As a result, they had a personal interest, as well as a conflict of interest, in ensuring that InSite be recognized as successful.  In effect, their research was carried out for the purpose of supporting the political objective of continuing the operation of InSite.

According to information obtained under the Access to Information Act, between 2003 and 2011, these very same researchers on InSite who had previously lobbied for the injection site, received over $18 million from the Canadian Institute of Health Research (CIHR) to carry out their research.   Their studies were peer reviewed only by supporters of the drug injection facility.  Also, these researchers, contrary to standard scientific procedure, refused to share their data with other researchers so that their studies could be replicated.  One of these studies on InSite was published in the British medical Journal, Lancet on April 18, 2011.  This study was pivotal in the decision by the Supreme Court of Canada, handed down on September 30, 2011, to prevent the federal Minister of Health from closing down the injection site.

According to this 2011 study, there was supposedly a 35% reduction in overdoses in the 500 metre radius around InSite, while in the rest of Vancouver, the rate decreased by 9% due to the presence of InSite.

However, an international team, consisting of three Australian medical doctors, (including an epidemiologist and two addiction medicine specialists), a Canadian academic and an American psychiatrist, found serious errors in the advocates’ studies, which invalidated their findings. Their objections to the InSite research was published in Lancet, British Medical Journal, January 14, 2012, Vol. 379.

In fact, a B.C. Coroner’s report showed that overdoses actually increased in the InSite area by 14%, or 11% when population-adjusted, between 2003, the year before InSite opened, and 2005, the final year of the study period.

Minister Philpott stated at page 17 of her testimony “There is already lots of evidence that these drug injection sites do not increase crime rates”.

On the contrary, according to The Expert Advisory Committee on Drug Injection Sites, in its report released March 31st, 2008, the crime rate does increase in areas surrounding the drug injection sites because each addict causes $350,000 worth of crime each year in order to purchase drugs from a trafficker to feed his/her addiction. 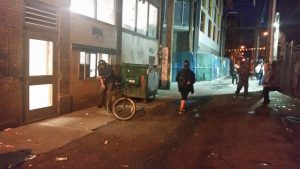 Crime Occurring in the Vicinity of the InSite Area

The reality is that crime is such a problem in the area surrounding InSite that according to Inspector, John McKay, responsible for policing InSite, 65 officers from the Vancouver Police Department patrol the five-block area around InSite, in order to control the crime. The police officers are prohibited from charging addicts with possession and, instead, are obliged to escort the addict into the injection site.  Drug addicts obtain their illicit drugs, of questionable purity, from drug traffickers located in the area, and the addicts bring these into the site for injection purposes.  As a result, the drug injection site becomes a “honey pot” or meeting point for drug traffickers.

Toronto Police Chief Mark Saunders (Toronto Sun April 2nd, 2017) has expressed concern about the enormous resources that will be required once Toronto’s proposed three supervised injection sites are opened at the end of 2017.

The Senate Legal and Constitutional Affairs Committee recommended in its report dated April 13, 2017, an amendment to Bill C-37 believing that drug injection sites can control the crime rate, by requiring a person using the site be provided with an “alternative pharmaceutical therapy”. This proposed “alternative pharmaceutical therapy” includes the drugs suboxone, methadone, and heroin, which use by the addicts simply substitutes one addictive drug for another.

The Answer to Addiction

The real answer to addiction is to provide treatment. Bill C-37 ignores the fact that addicts can be assisted in receiving proper treatment by way of the criminal justice system which is the major engine that gets addicts into treatment and recovery.

Research carried out at the University of Glasgow, Scotland and the Centre of Drug Research in Glasgow, Scotland, indicate that treatment of drug addicts increases when drug enforcement occurs.  That is, positive results flow from drug enforcement in that one of the aftermaths of police operations is that there is a marked increase in the proportion of drug users seeking treatment.  This is because drug courts allow the conviction to be suspended if the offender agrees to take treatment and be monitored through regular urinalysis and counselling.  Those who complete the drug-free program receive a suspended sentence or conditional discharge.  Those who fail, are required to return to the regular court system for sentencing.  When offered a choice between a drug conviction or treatment, the addict chooses treatment.

It is significant that there is no difference in outcome between those addicts who seek treatment voluntarily or by way of the courts.

The real question to be addressed is whether addicts should be encouraged to continue their debilitating addiction by way of drug injection sites offering or permitting drugs to be injected, or given positive help by way of treatment to return to a healthy and normal life.

A compassionate society should not kill addicts by furthering and encouraging their addiction which is the result of the implementation of Bill C-37. Rather, society should reach out to addicts by way of providing them with treatment and eventual recovery to return to their normal lives.