REAL WOMEN OF CANADA
is a pro-family women’s movement.

Our common bond is our belief that the family is the most important unit in society.

We are dedicated to promote the equality, advancement and well-being of women whether in the home, the workplace, or the community, and to motivate government to integrate the needs of the family into government policy and legislation.

Become a member or renew your membership and help us bring about change for the betterment of women and families.

See the benefits of becoming a member.
Learn More

Analysis & Updates on Politics & Social Issues that Impact Women, the Family and Society.

Current News from the Only Pro-Family Women’s Movement.
Learn More

Sign up to receive current news items and timely action items related to our issues delivered right into your own personal email inbox.

Help REAL Women of Canada promote the equality, advancement and well-being of all women, and to motivate government to integrate the needs of the family into government policy and legislation.

We are the only social conservative women’s advocacy group in Canada.  Since federally incorporated in 1983, REAL Women of Canada has positioned itself as the only independent, non-government funded, non-profit organization representing women who uphold traditional values in a not so traditional world. We are an alternative for the majority of Canadian women who do not support the radical feminist ideology.  At the core of our efforts is the belief that the natural family of mother, father and children is the most important and fundamental unit of society.

When government steps in to create legislation which undermines the family, we step in to share a perspective that may otherwise not be represented.  We promote the equality, advancement and well-being of women.  We believe in respecting life from conception to natural death and we bring opinion to societal issues that weaken, ignore, and even destroy our core values of family, freedom and faith.

When you donate $100.00 or more to REAL Woman of Canada, we’ll send you a copy of a book of your choice. 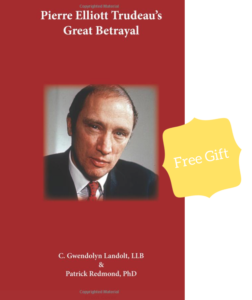 This book is about the history of abortion laws in Canada and how there are now NONE today. Released  May 30, 2017
In Canada, abortion was included in the Canadian Criminal Code when it was passed in 1892. From 1969 to 1982, dramatic changes took place on the abortion issue. A great betrayal of the Christian principles upon which Canada was founded took place. The Liberals, under Prime Minister Pierre Trudeau, passed an Omnibus Bill in 1969 legalizing abortion under certain conditions. Again under Trudeau, another negative milestone was reached when the Liberal government passed the Charter of Rights in 1982. This constitutional change led the Supreme Court of Canada to remove all protection from the unborn and allowed abortion on demand, up to, during, and after the birth of the child. This study is about those who knew what was happening and who fought to stop it.
Review by Dan Di Rocco, The Interim, June 21 2017  Click here
Review by Douglas Alderson, the Quarterly Ledger, July 2017  Click Here
Review by Lou Iacobelli, July 13, 2017 Click here
Available at Amazon.ca
Please note that with a minimum donation of $100 to REAL Women of Canada, we will send you a complimentary copy of the book. Use promotion code PET2017 in the box marked “purpose”.
claim your book now 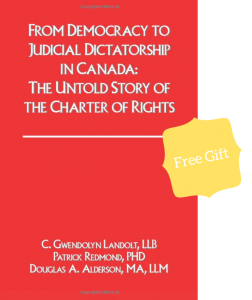 This book provides the reader with a three part assessment of our current state of constitutional crisis. The first part is a survey of the politics that went into the 1982 patriation of Canada’s Constitution. The second, the loss of Parliamentary sovereignty and the rise of judicial activism. In the third part, the authors make the case that reform is not only necessary but possible. Both the courts and Parliament must actively seek to re-balance their respective roles based on principles of responsible government and electoral accountability, to ensure that Canada, once again, becomes strong and free, rooted in the consent of the governed.

Available on Amazon.ca.
Please note that with a minimum donation of $100 to REAL Women of Canada, we will send you a complimentary copy of the book. Use promotion code CHARTER.
claim your book now

As a non-partisan, non-denominational national women’s organization which supports the family, the foundation of society, [...]

The Blame for Residential Schools lies with the Federal Government

REAL Women of Canada is a voice for women who support life and the traditional [...]

The demands made by woke progressives in our culture are insatiable.  Their demands are intellectually [...]

REAL Women has expressed many times its concerns about Canada’s falling birth rate and the [...]

The Unsavoury Truth About Surrogacy

The media are full of tender stories about how loving, infertile couples have found joy [...]

Difficult to Believe This is Happening

The curious behaviour of some prominent individuals is amazing. It’s hard to believe the irrationality [...]