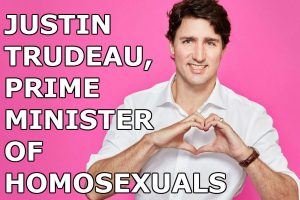 Justin Trudeau can’t say “no” to any demands made by the LGBT community, (lesbian, gay, bisexual and transgendered).  He is an obedient servant to their cause.

In July, 2016 he made two specific controversial commitments to them:

I. Blood donations from homosexuals to be accepted after only one year’s abstinence from their having same-sex relations;

However, a tragedy occurred in the 1980’s when Canada experienced one of its greatest health disasters due to tainted blood donations causing 800 deaths, mainly due to blood donations contaminated by AIDS.   Consequently, Canada, along with many other countries refused blood donations from homosexuals who had sex with another man during their lifetime.

Under political pressure from homosexual activists, this ban was relaxed in Canada in 2013 to permit blood from homosexuals who have not had sex with a man for a five-year period.  This latter decision, however, was unacceptable to homosexual activists who claimed that this five year ban was discriminatory and “intrinsically abhorrent to the fundamental Canadian values of equality and non-discrimination”.  They screamed, of course, that the Canadian Blood Services was “homophobic”.  There was no concern at all expressed by them about the public’s right to protection from receiving contaminated blood.  The latter was irrelevant to them even though gay men make up 49% of new HIV cases in Canada.

As a result of this pressure, on July 12, 2016, the Liberal government reduced the waiting period to donate blood for homosexual men even further, from five years to one year’s sexual abstinence.

Although there is a still-imperfect scientific technology to test for HIV, the LGBT community is still disappointed with the one-year deferral period, as is also, apparently, the Liberal government, as Canadian Health Minister, Jane Philpott, cheerfully announced in July, 2016:

There is an incredible desire and certainly a commitment on the part of our government to work toward further decreasing that donor deferral period.  The desire is to be able to have those deferrals based on behaviour as opposed to sexual orientation.

It is homosexual behaviour that contaminates the blood system.  Is she going to rely on a homosexual donor’s assertion that he never has homosexual relations, or if he does not, he always uses condoms, and as a result, his behaviour is safe?  Some protection for the public that is going to be!

In its report, EGALE also calls for the repeal of the bawdyhouse laws (S.210 and S.211 of the Criminal Code).  A “bawdy house” is defined in the Criminal Code to mean a place used for the purpose of prostitution, or acts of indecency. This provision also prohibits public sex.  This latter provision has been used in the past by police in its bathhouse raids.

Medical evidence does indicate different kinds of psychological or physical harm may attach to different types of intercourse for young persons.  Medical experts are not certain at what age sexual preference is established, and many argue that the age is fixed only in the later teen years.  Also the question here is the heightened danger of contracting Acquired Immune Deficiency Syndrome or other sexually transmitted disease from penetration.

The Liberals are also now studying even further demands submitted to the government by the homosexual organization EGALE in its report.

(i) Individual compensation to those who suffered past discrimination because of “who they were or whom they loved”;

(ii) Providing all police officers or others in the justice system with human rights training with regard to the historic wrong of treating members of sexual minorities as criminals, etc.;

(iv) Implementing procedures to protect the dignity of transgender or intersex persons in prisons or jails;

(v) Eliminating laws re keeping a bawdy house or criminally charging those who visit a bathhouse or who practise group sex.

III. Trudeau to Apologize to Homosexuals.

In August, 2016, Trudeau agreed to publicly apologize on “behalf of all Canadians” to those who were imprisoned, fired from their jobs or otherwise persecuted in the past because of their homosexuality.

However, there has been a law prohibiting homosexuality since 1892 when the Criminal Code first came into effect.  This law reflected the views of the Canadian public at that time, who rejected homosexuality because they thought it repugnant.  (This is the reason that British writer Oscar Wilde was jailed for homosexuality in England in 1900, since he contravened the law prohibiting the unacceptable homosexual activity of sodomy).  Because homosexuality was illegal and unacceptable to society, homosexual persons in the military and public services in Canada and elsewhere were particularly vulnerable to blackmail and a security risk.  That is why they were dismissed from employment in the past.

Like much else about Justin Trudeau, he doesn’t think very deeply, and doesn’t understand the history, complexity and ramifications of his decisions on this issue and most others.  As a result, he may well accede to these unreasonable homosexual demands.