The Land of the Absurd

The Land of the Absurd 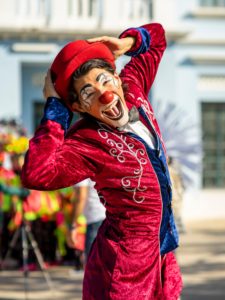 No matter how kooky the woke culture idea is, there are some who abandon all rational thought to apply the idea.

This surrender of intellect to the crazy culture must be a compelling emotional need, as there is no other explanation for such foolishness.

This susceptibility has led to some respectable institutions and individuals becoming a laughingstock, dropping their institution and themselves into the land of the absurd where no sane person wants to follow.  Examples of this peculiarity include:

The Toronto District School Board (TDSB), Canada’s largest school board has established specialty schools for talented children, whether in dance, music, filmmaking, advanced mathematics, science, athletics, or writing, etc. This model was implemented to encourage talented children to develop expertise in their chosen field.  To gain admission to the specialized schools, the student had to audition, write a test, or indicate their particular talent in some specific way to demonstrate their potential.

The woke culture, however, has now decreed that this system is a haven of elitism and privilege for students and discriminates against students who are less talented.

Consequently, the TDSB has decided to permit all students to have a chance to be admitted to special schools providing that they “express an interest” in a subject.  If so, their names will be placed in a lottery to be chosen at random – regardless of aptitude, experience, or skill.  The talented violinist or oboist, athlete, dancer, mathematician, etc., whose name is not pulled in the lottery will languish at home, with a less talented student replacing him/her in these specialty schools.

The military life is hard on families. They are uprooted to new assignments so regularly that they cannot put down roots in any community. They are frequently separated for long periods of time when usually the father is ordered away on extended duty, leaving the mother to hold the family together by herself.  A soldier dying on the battlefield wants the comfort and solace of a chaplain of his own faith kneeling beside him in his agonizing last moments.  This is why military chaplains are so vital in military life.  They are needed to provide pastoral and spiritual care to members of the armed forces and their families.

However, an advisory panel, established by the Department of National Defence, has recommended that Roman Catholic and other armed forces chaplains be replaced by those of other faiths.

The Department of National Defense set up the advisory panel, called Systemic Racism and Discrimination Panel, which released its report in January 2022.  To describe this panel’s recommendation on chaplains as idiotic is to be unduly polite.  Lunacy would be a more accurate description.

Section 6 of the report, titled “Re-defining Chaplaincy”, states that for some Canadians, “religion can be a source of suffering and generational trauma because the faith of some chaplains do not subscribe to diversity by excluding women from the priesthood because of sexist notions in their dogmas”.  Further, lesbian, gay, bisexual, transgender, queer, and two-spirit, as well as Indigenous peoples have suffered “generational trauma” at the hands of Christian religious leaders and must be protected from these chaplains.  Presumably, these chaplains include Roman Catholic, Orthodox Jew, Muslim or Evangelical chaplains.  The panel’s solution was to recommend the rejection of chaplaincy applications whose “values” are not aligned with those of the National Defence.  Who knew these individuals had the talent to assess the “values” of members of the armed service, let alone assess and replace Judeo-Christian and other traditions with their own moronic tinkering and misunderstanding of religion?

Fortunately, the office of the Minister of National Defence issued a statement that military chaplains from many faiths will continue as part of the Canadian armed forces.  Somebody in the DND seems to have some common sense.

Universities in Canada are so woke and immature that they can now fit very comfortably in kindergarten classes.  Certainly, intellectual maturity has eluded them.  They seem to be happy to play to the hilt the children’s game “Simon Says”, which kindergarten children love to play, whereby they imitate what the leader does and says.  Great fun is had by all.

The University of Waterloo has restricted three top tier research positions to exclude white, heterosexual males, and will employ in these positions only those who are Indigenous, female, (and those of course, who self-identify as such), or transgender, non-binary, or two-spirit.

One of the engineering positions is open only to First Nations, Metis, Inuit, and those from other indigenous communities across Turtle Island, which is what Indigenous people call Canada.

Universities seem to have assumed the false notion that discrimination can be good. It cannot. One’s colour or group affiliation is the least important characteristic, no more important that the colour of one’s shoes!  Jews were excluded from universities in Canada until the 1930s.  Here we go again.

It is an indisputable fact that when characteristics, such as colour, become the bar by which someone is offered a job, unfortunately, too often, one is going to hire people who are not the best qualified.  It also suggests that the person hired could not make it on his/her own merit, which is the height of bigotry.

Laval University policy specifies that only women, Indigenous people, people with disabilities, and visible minorities will be considered for employment.

A job offer, however, should be open to all candidates. According to Quebec’s Minister of Indigenous Affairs, Ian Lafreniere, “it’s borderline insulting for a candidate to be selected because of their gender or skin colour”.

Bluntly stated, this policy prevents an individual with a certain profile from being evaluated on the merits of their skills.  This is clearly discrimination.

Professor Frances Widdowson, a tenured professor at Mount Royal University since 2008 (fourteen years), was dismissed from her position in the Department of Economics. She, alas, had the temerity to say out loud that residential schools had educational benefits and was also critical of Black Lives Matter. Such unthinkable opinions openly stated, in university conversations, are not permitted.  Intellectual exchanges are off limits at universities.  It is rare for a tenured professor to be dismissed for political views, but that is what has occurred at Mount Royal University.

Professor Widdowson, however, is not quivering in fear over her firing, but has appealed the decision. She has dared to breach the ‘Simon Says” rules required at universities.  In the woke culture, universities are reduced to the level of kindergarten children.