The Downfall of Disney

The Downfall of Disney 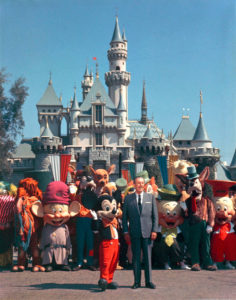 For decades, Disney has captured the hearts of children (and their parents) with its charming delightful stories and music. Its theme parks have excited children, enthralled by the costumed presence of their favourite Disney characters in the Magic Kingdom. Because of its outstanding creativity and other talents, Disney has created a mountain of good will and has made billions of dollars for its shareholders.

Simply put, Disney was on top of the world, culturally and creatively, as well as being an astonishingly successful business enterprise.

What could possibly go wrong with such a business that never seemed to put forward a wrong step? Something did go seriously wrong. The Disney empire became part of the left wing culture, which attracted, among its 190,000 employees, homosexual activists and executives. They used their positions to promote their own agenda in a brazen attempt to change society to be woke and progressive.

This change was slowly and carefully introduced by slyly including, here and there, homosexual and transgendered characters. These changes were noted, however, and a petition of 1.4 million signatures was delivered to a shareholders’ meeting in 2019.  It was ignored. What was a mere million people when millions more were enjoying Disney productions and spending money at Disney theme parks? Money continued to pour in. As a result, the homosexual executives at Disney became louder and more bold.

A leaked video of an executive meeting indicated just how far Disney was planning to go. Disney’s corporate president of Disney General Entertainment, Kathy Burke, stated she wanted to see 50% of characters as LGBTQ by the year’s end.  A Disney executive producer for Television Animation, Latoya Raveneau, stated she had complete freedom at Disney to promote her “not-at-all-secret gay agenda”.

Another Disney executive production coordinator, Allan March, said that he had “put together a tracker of our background characters to make sure we have the full breadth of expression”. He specified gender non-conforming characters and “canonical” trans, asexual, and bisexual characters.

The executives bragged that Disney’s beloved family movie series, Toy Story, would include homosexual kissing front and centre in this year’s production, “Buzz Lightyear”. In its wider streaming service, Disney+ has already included the popular show, “The Proud Family”, it will be used to promote homosexuality, even though the show is designed and intended for children. One of the characters will now be transgendered and two dads will be featured.

Disney believed that its success gave it power and influence that could not be constrained, and was willing to prove it. Florida passed legislation that classroom sexual orientation or gender instruction identity for kindergarten to grade three, or teaching in a manner that is not age-appropriate or developmentally appropriate for students, would be prohibited. On March 11, 2022, Disney CEO Robert Chapek announced that Disney’s goal was to repeal this legislation or have it struck down by a court. Further, he announced the establishment of a task force to make more LGBTQ-aware content for children. He also announced that its corporate donations would be stopped for all politicians objecting to the homosexual agenda.

Florida Governor Ron DeSantis responded to Disney, a corporation based in Burbank, California.  DeSantis made it clear that Disney was not going to tell the state of Florida what it may or may not do. On April 22, 2022, Governor DeSantis signed a bill to dissolve Walt Disney’s self-governing status in Florida, which will cost the corporation millions of dollars in tax implications. Republicans in Congress have demanded that the no-fly zone over Disney parks be rescinded.  Federal lawmakers have begun work to end Disney’s copyright extensions of such characters as Mickey Mouse.  On March 28, 2022 Disney’s stock price began to fall, and by April 22, 2022 Disney had lost $34 billion in value.

Disney’s “woke” culture is clearly backfiring.  A conservative billionaire, Peter Thiel (a homosexual himself), founder of PayPal, together with several other conservative/libertarian investors have announced plans to buy Disney stating, “this … ‘woke’ has gone too far”.  There are several disgruntled conservative shareholders in Disney who would be willing for Thiel and his associates to acquire a controlling interest in Disney.

In the meantime, Disney needs families to keep it going and families, therefore, must object to Disney’s indoctrination of children – no matter how charmingly done – by staying as far away from it as possible.

An impasse has occurred, with Disney suffering the immediate consequences for its blind support of the “woke” LGBTQ culture.

The Disney culture appears to be unravelling.