Real Women has published two new pamphlets. One is a pamphlet describing our work, our objectives and our associations.  The other pamphlet outlines the problems of illicit drug use.  It discusses in some detail the dangers of marijuana use which will, for certain, be a problem under the newly elected Liberal government. This information is vital to read and share with other concerned Canadians.

Give Drug Addicts Hope Not Despair

Also, if you would like hard copies of the brochures, they can be obtained from the National Office. 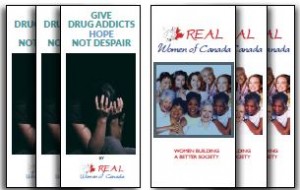