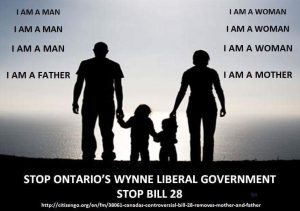 Ottawa  October 16 2016 – The Ontario Government, in unseemly haste, is ramming through a revolutionary bill to completely restructure “family” relationships solely to please the LGBT community.

This bill (Bill 28, An Act to Amend the Children’s Law Reform Act) turns on its head the former understanding of “family” which consisted of individuals united by marriage, blood and adoption.

This extraordinary bill was introduced in the Ontario legislature on September 29, 2016 and, at a breathtaking pace, passed second reading debate and was sent to the Standing Committee on Social Policy within a week. This haste was justified by the government on the grounds that the bill was all about “equality”, and who would object to that?

Not so fast. The difference is that children who are conceived by sexual intercourse are not the same as children conceived by an outside donor’s reproductive material. For example, a child by adoption already exists, but in this case a child is being deliberately conceived.  There is no provision for a registry to record who the donor is,  medical history, genetics, etc.  Bill 28 is a convoluted attempt to pretend, contrary to science and nature, that all situations are the same.

If proper debate had been permitted, some of the unintentional and unforeseen consequences of this bill would have been aired.

Bill 28 provides among its provisions that a child may have four parents, allowing a partner of the same-sex couple who has no blood ties with the child to become the parent of the child automatically, without adoption; sperm donors (fathers) are no longer deemed to be a parent of the child conceived; apart from a surrogacy agreement, there is no reference to the relationship of an ovum donor (the mother) to the child; and “mother”, “father”, are no longer mentioned on birth certificates.

Bill 28 does not address practical details such as the custody and support of the child. This muddled bill makes it extremely difficult to determine who is on first base in regard to the child.

If the courts currently are unable to track down one spouse for delinquent support payments, how is it going to track down three others? If two parents are frequently at odds over the upbringing of the child, just imagine three or four parents trying to agree?

Those drafting this muddled legislation obviously anticipate that there would be extensive litigation since the bill provides at Section 13(1) as follows:

At any time after a child is born, any person having an interest may apply to the court for a declaration that a person is or is not a parent of the child.

Some lawyers will be pleased with this legislation.

Of course, opposition leader Patrick Brown, was as silent as a tomb during the debate, failing in his responsibilities as opposition leader. He fears criticizing any social policy of Premier Kathleen Wynne and offending his new found friend in the LGBT community.

Only two days have been set aside for public consultation on October 17, 2016 and October 18, 2016. For more information, go here.