The UN Under New Management – REALity

The UN Under New Management – REALity

One of the benefits of Donald Trump’s election as President of the US is that the former Obama Ambassador to the United Nations, Samantha Power, an ardent feminist, will no longer be manipulating the UN on behalf of President Obama.  The US provides 22% of the UN’s regular budget and makes large voluntary contributions to its numerous agencies.  As a result of this financial support, Obama, together with the European Union and some Latin American countries, have been able to relentlessly push a pro-homosexual, anti-family agenda at the UN.

President Trump has appointed as his UN Ambassador, Nikki Haley.   She was the pro-life Governor of South Carolina.  She has a strong pro-life record, and, in 2013, defended South Carolina’s constitutional amendment upholding marriage as between one man and one woman.  She also signed the Pain-Capable Unborn Child Protection Act, which protects babies from painful late-term abortions.

A New Secretary-General of the UN

The former Secretary-General of the UN, Ban Ki-moon, was an obedient servant to Obama and the EU during his term of office.  He never failed to promote the anti-life, anti-family agenda promoted by the West. 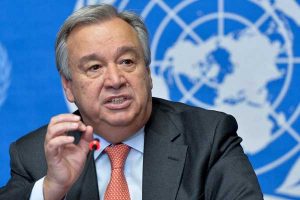 The new Secretary-General is António Guterres, the former Prime Minister of Portugal.  He is a devout Catholic and a man of deep faith and serious convictions.  While Prime Minister, his socialist party presented a draft law to legalize abortion on demand up to 12 weeks of pregnancy.  Mr. Guterres made his opposition to this law clear and voted against it.

Mr. Guterres has his work cut out for him with the UN agencies determined to impose homosexual and abortion rights into UN documents.  However, Mr. Guterres stated: “As Secretary-General, having been chosen by all Member States, I must be at the service of them all equally and with no agenda but the one enshrined in the UN Charter.”

Mr. Guterres has also held the top UN job as a forceful and passionate UN Commissioner for Refugees.  In that job he cut headquarters costs by some 20%, arguing the money should be spent on refugees.  He managed to raise funds while criticising the major donors – both the United States and the Europeans – over the failings of refugee policies.

For the moment, there is a space at the top of the diplomatic pyramid for an experienced mediator, and Mr. Guterres looks like the man to fill the job.  Clearly, Mr. Guterres as Secretary-General has the potential to work within the UN to improve its dismal history.