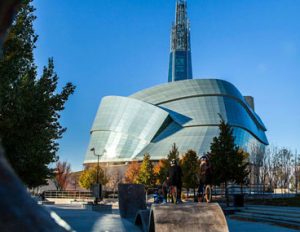 The Museum for Human Rights is a white elephant situated on the Red River in Winnipeg. It is a never-ending waste of taxpayers’ money.

It started out in 2007 with a budget for building the museum set at $265 million. The museum ended up costing $357.5 million mostly paid by the taxpayers, although it did have private donors.

In September, 2014 this over-budget museum opted to spend $1.89 million to mark its opening. Since private sponsors could not be found to cover this cost, the museum went ahead and spent the money anyway!

The operating costs for the museum are substantial: In 2014-15, total expenses came to $25.5 million, while revenues were only $1.8 million.  The museum, as predicted, is far from being a financial success.  The museum provides locations for exhibits promoting the supposed success of such groups, among others, as feminists and homosexuals and the questionable success of Pierre Trudeau’s Charter of Rights.  It receives $21.7 million in annual funding from the federal government.

Even with this cash benefit, the museum is unable to balance its budget. The Museum for Human Rights, apart from a few exhibits such as the Holocaust or the Ukraine Holodomor, serves no purpose but to support a left-wing interpretation of human rights.