By: Jean Echlin and Ian Gentles 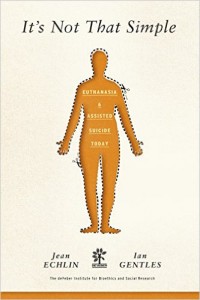 This is a rare book, which gives precise answers to many questions about euthanasia and (assisted) suicide. It reports that those who receive well designed hospice care and pain management do not ask for euthanasia and suicide. The authors claim that where good care exists, the demand for euthanasia evaporates. They also suggest that a morbid need to control death is fueled by fear. Rather than focus on death management, good medical (palliative) care addresses the living person’s needs.

The authors state that people ask for death at the hands of physicians primarily because of depression, which is temporary and treatable. Other reasons are isolation, losing autonomy, losing enjoyment of life and not wanting to be a burden on families. They also point out that our medical system often fails to provide adequate pain management. Patients often contemplate euthanasia because they anticipate that they will suffer excruciating pain and are fearful of death. But pain can be alleviated by ensuring that palliative care (good medical practice) is available, that fears will be addressed by encouragement and care.

The book corrects the widespread myth that palliative care is only for the dying. In fact, palliative care is also used for serious illnesses which do not necessarily lead to death. Rather, it is the best of care for anyone facing a life threatening disease, not necessarily at the terminal stage. Rather than death management by euthanasia and assisted suicide, palliative care is good medical care applied to the whole patient and addresses total pain on four levels: physical, psychological, social and spiritual. The book provides hope for patients and families facing illness.

Euthanasia and assisted suicide are driven by emotionalism, fear mongering and euphemisms that cloud the issue. Assisted death is introduced under many guises: as medical aid, as a continuum of healthcare, as physician assisted suicide (although in experienced countries it is the nurses who provide the deadly injection, not always with a physician’s consent), as death with dignity, as a right to die. Opponents have called it a death service, the ultimate act of violence, doctor assisted death, corruption of health care, a new social disorder.

The authors cover, in a very readable fashion, the intricacies of Canada’s juridical path to legalized, assisted suicide. It addresses how the courts interpreted Section 7 of the Charter (the protection of the right to life, liberty and security of the person) to mean the right to be killed with professional assistance and how the Supreme Court radically contradicted the express will of the Canadian Parliament, representing the public, which repeatedly refused to alter the Criminal Code’s prohibition of euthanasia and assisted suicide.

Parliamentary Report –
“Not to Be Forgotten: Care of Vulnerable Canadians”

The book provides an excellent accounting of the facts and events surrounding euthanasia and assisted suicide in Canada and the world. It is a handy reference to related studies, statistics, documents and parliamentary reports on this issue.  Answers have already been provided but not applied in a comprehensive manner. Among the many tax-funded reports dealing with the issue, the authors highlight the recent, Not to be Forgotten: Care of Vulnerable Canadians, published in November 2011 by the Parliamentary Committee on Palliative and Compassionate Care, comprised of 60 MPs and former MPs from all political parties.

This report is comprised of three important parts:

The report considers the legalization of euthanasia to be an imposition on doctors, nurses, hospitals and long-term care institutions. It reminds us that medical professionals will lose the trust of patients, and that medicine, now highly regarded, will be corrupted. The report lists the groups most vulnerable to abuses: the elderly, especially women who are victims of misogyny; certain cultural and ethnic groups; aboriginals; domestic violence victims; those prone to suicidal ideation; patients with chronic and life-threatening diseases; and many others. The report estimates that 70 to 80 % of Canadians do not have access to adequate palliative care. The report states that veterinarians receive five times more education about pain control for animals than physicians do for human beings.

Thirty-five pages of very interesting reading describe the experience of jurisdictions which have legalized euthanasia and assisted suicide. Concerns that Canada will not keep meticulous records once these actions are legal are justified. Available statistics show that governments lose control as legal safeguards are flaunted, e.g., life is terminated without consent and euthanasia deaths are unreported. A progressive increase in deaths has been recorded in euthanasia jurisdictions. The age for qualification decreases as even infants are now euthanized in the Netherlands and Belgium. Qualifications for euthanasia are loosened as those who are neither terminally ill nor dying avail themselves of the service. Such conditions as autism, anorexia, borderline psychiatric disorders, chronic fatigue syndrome, partial paralysis, blindness, coupled with deafness, manic depression, transgender surgery dissatisfaction are among the disorders that qualify for euthanasia for the patient. Depression, which is treatable, is left untreated and euthanasia is provided instead. A decrease in proper medical care of the suffering and dying becomes a reality with this easy and inexpensive alternative.

In Oregon, an insurance company refused to pay for expensive therapy and suggested suicide pills at $50. Prescriptions for suicide pills increase every year in some jurisdictions. In the Netherlands, some proponents of euthanasia now admit publicly that they were “terribly wrong” to take that route.

Euthanasia and assisted suicide are illegal in 192 countries. Asia, Africa, Latin America (except Columbia), most of Europe and most of the United States have made these acts criminal. The 2% of jurisdictions that have embarked on euthanasia, starting in 1997, are Columbia, Oregon, Albania, the Netherlands, Belgium, Luxembourg, Washington State, Montana, Vermont and Canada in 2015.

The authors note that Quebec, rather than respecting human freedom, has passed a new law which restricts freedom of medical personnel and institutions to the extent that the authors predict that institutions which refuse to kill patients under their care, such as religious hospices and hospitals, will be abolished. The law has elevated the deliberate termination of life to medical care. Canada’s new social order, aided by the media and legitimized by the Supreme Court, has made the autonomous will a priority over the common good.

In contrast, many other jurisdictions refuse to slide down the slippery slope. In 2011, the German Medical Association’s revised principles stated: “The physician’s involvement in suicide is not a medical task” and “it is the duty of the physician to protect and restore the patient’s health as well as to alleviate the patient’s suffering….” Euthanasia and assisted suicide continue to be illegal in Germany.

In 2015, the World Medical Association expressed a near global consensus that to decline unwanted medical treatment is a basic right but that “physician assisted suicide, like euthanasia, is unethical and must be condemned by the medical profession.”

This is a book well worth reading as we face an attempt to alter our envied cultural tradition of medical care in Canada.