On June 6th, 2017, the Minister of Global Affairs (formerly Foreign Affairs), Chrystia Freeland, gave a speech setting out Canada’s foreign policy under Prime Minister Justin Trudeau’s Liberal government.  In her speech, Ms. Freeland falsely stated that the U.S. is withdrawing from its international responsibilities.  This is totally wrong.  U.S. President Donald Trump simply requested a more equitable contribution from other countries, which merely amounts to a re-definition of a U.S. continued assumption of its onerous leadership burden.  Ms. Freeland should have paid attention to what President Trump actually said. 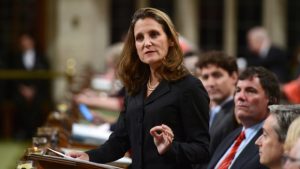 Because of Ms. Freeland’s misunderstanding, she has concluded that Canada must now step into the breach with “hard power”. This is absurd.  Our military weight doesn’t really count for anything internationally.  For example, in 2016, the U.S. spent $611 billion on its military and Canada spent just $15 billion.  We don’t even own an aircraft carrier!  Ms. Freeland’s comments are like Mighty Mouse standing up and flexing his muscles.  Ms. Freeland pursues her fantasy because the government plans to invest billions to beef up our military from $18.9 billion this fiscal year to $32.7 billion in 2026-27.  There is no hint as to where this money will come from.  In fact, the Liberals plan to spend $553 billion on the military over the next 20 years!  This is to presume, of course, the Liberals will still be in power at that time.  It’s a pretty safe bet, under the circumstances, that the Liberals will not likely have to answer for their grandiose military fantasies.

What is even more disconcerting about Ms. Freeland’s speech is that she said that Canada’s foreign policy is to uphold “Canadian values”, and then goes on to state that these values include feminism and abortion. Those may be her and Trudeau’s values – but Canadians are not that mixed-up!  This is not to suggest that all Canadians are pro-life, but most Canadians, unlike Trudeau, are able to grasp the fact that offering abortion and population control as a solution to Africa’s problems is not too sensible.

It is important, and historic, that we have a prime minister and a government proud to proclaim ourselves feminists. Women’s rights are human rights.  That includes sexual reproductive rights and the right to safe and accessible abortions.  These rights are the core of our foreign policy.

To that end, in the coming days, my colleague the Minister of International Development and La Francophonie will unveil Canada’s first feminist international assistance policy, which will target women’s rights and gender equality. We will put Canada at the forefront of this global effort.

What’s with Trudeau’s obsession with abortion? It seems that he has a strikingly limited intellectual capacity to understand issues – including abortion.  He seems only to grasp the “progressive” chants of the day on abortion, such as “a woman’s right to control her own body”, etc. etc.  He clearly doesn’t have the ability to critically analyse the issue, to grasp any understanding of the humanity and dignity of the unborn child, and the implications to society of their massive slaughter.

Instead, his government has locked itself into a twisted ideology that has become its obsession. His government is seriously and continuously spending millions of tax dollars to further its obsession to entrench reproductive control in Third World countries, especially, Africa.  This has, according to Freeland, “become the cornerstone of Canadian foreign policy”. Trudeau and his government seem unaware of the many global injustices that exist at present, such as female infanticide, female genital mutilation, lack of women’s rights to education and genuine health care needs, including maternal and infancy care.  His cabinet doesn’t seem to grasp the fact that health care includes medicine, vaccinations, nourishment and clean water.  Doesn’t this government know that there is an impending famine in parts of Africa?  Doesn’t Trudeau realize that he is ruthlessly trying to impose his own personal values on family oriented Africa, when, at the same time, he is ignoring Canadians’ opinions on the matter?

Instead, the federal government has unveiled what it calls “Canada’s First Feminist International Assistance Policy” with plans to eventually ensure that at least 95% of the country’s foreign aid be provided to “improve” the lives of women and girls by providing “reproductive rights” (abortion) and contraception.

Development Minister Marie- Claude Bibeau, at a news conference on November 26, 2015, stated, “Contraception and even abortion is only a tool to end poverty”. Doesn’t she realize that poverty, rather than the population, should be eliminated by many other alternatives, such as access to education and the use of modern technology?

Trudeau and his Liberal government have committed the taxpayers’ money to his personal obsession.

Certainly, Africa needs Canadian foreign aid, but the last thing it needs is what Trudeau is thrusting on them. Trudeau’s arrogant actions are cultural and racial Imperialism just like some actions of the old colonial masters.

Trudeau’s limited understanding of his role in developing countries is an embarrassment to Canadians. His lack of knowledge and understanding of the world around him is a tragic reminder that he is ill-prepared to be Prime Minister.

Minister of Global Affairs, Chrystia Freeland, hypocritically stated, in her June announcement on Canada’s new foreign policy, that “it is clearly not our role to impose our values around the world”. What precisely then is she doing? Is it possible that she and the Trudeau government aren’t thinking at all?

Please write to Prime Minister Justin Trudeau, Global Affairs Minister Chrystia Freeland and your MP raising your objections to Canada’s foreign policy, which has, as its cornerstone, the spread of abortion and population control. Their addresses are as follows:

The Right Honourable Justin Trudeau
Prime Minister of Canada
Office of the Prime Minister
80 Wellington Street
Ottawa, ON K1A 0A2