Anti-Family Failure at the UN

Anti-Family Failure at the UN 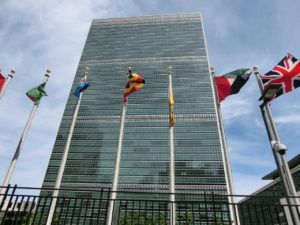 For nearly twenty years, the UN has been a battleground between nations that are leftist or progressive and those that support conservative, traditional values.

The goal of this struggle: that the leftist Western countries, such as the European Union (EU) and the U.S. (under Democratic President Biden) are attempting to force all countries of the world, by way of the UN, to accept their values such as abortion, LGBT rights, and an extreme sexual education curriculum which normalizes homosexuality and transgenderism.

The EU position is supported by the United Kingdom and the so-called Mountain Group, which includes Australia, Canada, Iceland, Liechtenstein, New Zealand, Norway, and Switzerland, as well as the San Diego Group which speaks for some countries in Latin America, but not all.

The conservative countries include the African countries, Brazil, and the Middle Eastern countries. They are appalled by the cultural colonialism being exerted on them by the West. These countries have consistently defeated the powerful Western countries in this contest of wills at the UN because the UN operates by consensus.  As a result, the non-Western, traditional countries can overrule the demands of the West.

The powerful Western countries jointly fund close to 70% of the UN budget. Because of this significant factor, the entire UN bureaucracy, including its Secretary General Antonio Guterres, the UN administrators and their agencies, especially WHO (World Health Organization), UNFPA (United Nations Population Fund), UNICEF (United Nations Children’s Fund), UNESCO (United Nations Educational, Scientific and Cultural Organization), and UN Women (which is the UN entity leading the way in advocating these controversial policies) have attempted to manipulate the UN in this regard over the years, even though they have no mandate to do so.

Currently, the EU is struggling to keep its own organization together, as some of its eastern European members, such as Poland, Hungary, Bulgaria, Latvia, Lithuania, and Slovakia are resisting the EU’s anti-family policies. The dominant country in the EU is Germany, which itself is also currently experiencing internal difficulties. Its influential leader, Angela Merkel, stepped down in September 2021 and negotiations to select a new chancellor are ongoing. It should be pointed out that the EU also has an inherent structural flaw in that it is not democratically run.  It operates directly out of Brussels, where arrogant, unelected bureaucrats usually determine its policies that are then adopted by the European Commission, which administers the EU.

The wealthy Western countries at the UN experienced intense frustration when U.S President Donald Trump was in office. His no-nonsense, pro-family, pro-life policies encouraged countries with more traditional values to stand up to the West.

However, when U.S. President Biden was inaugurated in January 2021, among his first executive orders was to change Trump’s foreign policy to include abortion, LGBT rights, and the controversial sex education program at the UN. He appointed Linda Thomas-Greenfield to the post of U.S. Ambassador to the UN.  During her nomination, ignoring the world’s many problems, Ms. Thomas-Greenfield explained her understanding of her role, which was to be the leader on the issue of “women’s access to a full range of reproductive health services”, code at the UN for abortion. She described this as her “personal priority”.

The Biden administration’s expectation that the obstacles to the three controversial policies concerning abortion, LGBT rights and the extreme sexual education curriculum would end, came crashing down at the CSW meeting in March 2021. The pushback by the conservative countries was strategic, firm, and highly exasperating for the Biden government, and led to its defeat. This lack of headway was a bitter disappointment for all the wealthy Western countries.

This defeat can be explained by the fact that, in October 2020, former President Trump formed what was called the Geneva Consensus Declaration. This declaration was signed by 33 countries. It affirmed, among other policies, the inherent dignity and worth of the human person and every human being’s right to life; the family as a natural and fundamental unit of society and entitled to protection by society and the state; and that motherhood and childhood are entitled to special care and assistance. Biden hastily withdrew the U.S. from the Geneva Declaration, but this obviously didn’t do him much good.  In October and November 2021, the Geneva Declaration was strengthened by the addition of Guatemala and surprisingly, Russia.  President Putin called Western transgenderism “simply monstrous”, which he says “verges on crimes against humanity, under the banner of progress” (Moscow Times, October 22, 2021).

The Future at the UN

What lies ahead for the UN is, of course, unknown. All we do know is that this struggle will continue and that those on the pro-life, pro-family side will continue their competent work. These advocates consist of a network of worldwide NGOs who work tirelessly with the delegates from the now 34-country Geneva Declaration group to thwart the decadent policies of the wealthy, Western nations.